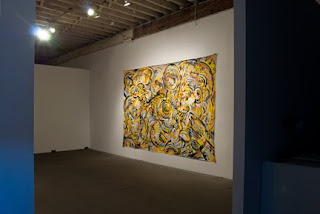 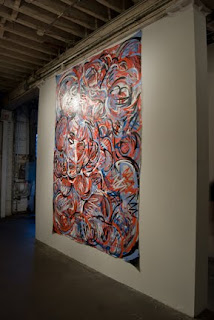 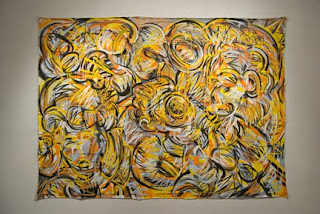 “Avarice and Accolades: Interpellation Re-Assessed ...and the Chymes of other Musings”
...a cursory description of the work/imagery displayed @ PØST on September 7th 2009 derived from excerpts to (3) similar communiqués sent out in August regarding my vested interests in art praxis
Undertaking these paintings is best described as an awareness of mental postures …the core source of my motives and the basis from which my "urges‟ to transcribe, mark, or transliterate “thought into form” coalesce …as a varying of inspirations: ...the resulted paintings without pre-determined ideas about design; composition [Etc.]
The oil paint is extracted from commercial tubes …ea. removed from their encasing(s) and placed into jelly-jars [canisters for making fruit-preserves] with varying amounts of linseed oil and mineral spirits ...which permit a flat film in paint surface. This desired quality for a matted “wet-over-dry” environment in contrast to other options [e.g. ...glazes; bees wax] ...and the use of mineral spirits to accelerate mixing/drying periods ...provide various forms of balance in the studio [e.g. space for working on multiple surfaces, (Etc.)]
The larger surfaces in scale ...provide for practical applications of "action‟ …e.g. spatial activity; gestural movement(s); happenstance; contradiction; flurry
Although elements of hue, chroma, & value, may appear to be similar [...at times] ...Not (2) single separate color selections is an exact match …nor is it my preference to attempt achieving any proximity to exactness ...regardless the available systems of meticulous measurement [e.g. Munsell, etc.].
The intentional “cross pollination” and/or pollution of these pigment arrangements through the manipulation of their physical consistency [originally ...an improvised studio discipline for conserving materials] ...provide inquiry and discovery into synergism(s) between the distribution of “the mark‟ itself; broader disruptions to surface; unstable residual effects [e.g. Gravity and atmospheric factors]; and the displacement of time: ...an oil paint that doesn't dry as rapidly ...compared to industrial enamels.
The processes experienced in the actual activity of developing these (3) paintings displayed @ PØST
...a playful awareness that seeks to explore the ruins of my own primal psyche ...in random gestural marks which serve as memoirs of elapsed time
These sojourns not so much to excise libidinal and/or other cathartic factors ...but to explore the latent capacity of the desire to form "meaning‟ [...that dynamic impetus within creativity and cognition that surges into actions of "markings‟ and its "translation"]
...whereby "inspirations‟ become indexed as mere "references‟ ...culminated in appropriations between conflicting states of mind ...in films of color
Michael Gomez Burton (2009)