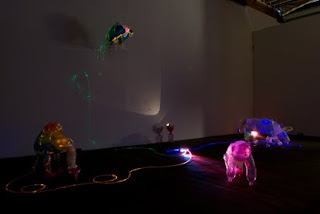 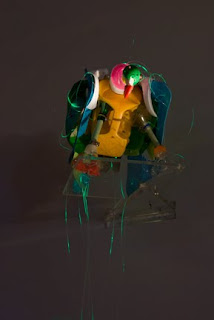 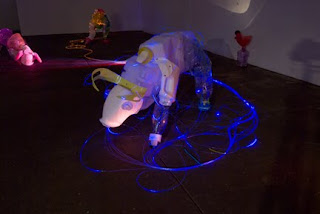 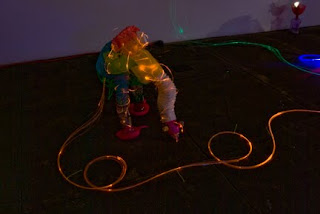 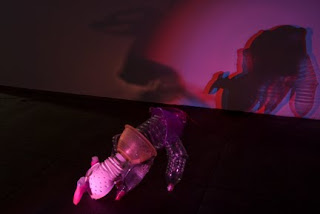 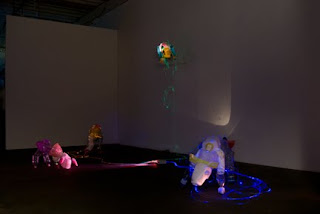 PØST presents a solo show of sculptures by Cynthia Minet, in one of 30 one-night shows scheduled at PØST during the month of September. The gallery space will house an installation of several animals made from recycled and repurposed clear and colored plastic containers and objects. Like creatures made from and escaping from the landfill, each animal aglow with optical fibers will nose around the space’s darkened floor.

This installation is linked to previous work that Minet presented at POST in 2000: seven lit boxes filled with hair gel and cast wax figure parts were suspended from the ceiling. Condensation on the plexiglass walls of the boxes partially obscured the eerie contents suspended in the gel.

Most recently, Minet’s interest lies with animals. Eight-legged “spidergoats”, two-headed cows, a pink Italian-coin studded lion that was recently exhibited in a Venice Biennale collateral event; all are visually compelling pieces that hover between the humorous and the macabre as they investigate genetic modification, ecology and mythology.

Minet’s work has been exhibited both domestically and internationally in museum and gallery group shows. Her 2005 solo show in Los Angeles at SolwayJones was reviewed in the Los Angeles Times. She holds an MFA from San Francisco State and was recently honored the FOTM Master Artist Award, Ventura, CA.

Unsustainable Creatures is the first manifestation of a larger solo exhibition that is scheduled for June, 2010 at Il Chiostro, in Padova, Italy.