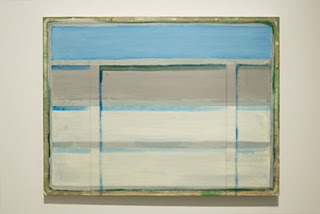 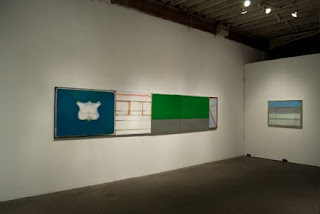 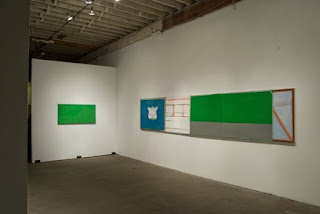 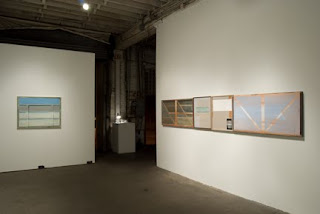 These works grow out of a process that begins as a response to the urban landscape. The mundane constellation of painted and patched streets, the familiar structures of bridges and overpasses, clouds of erased graffiti, and the divine notion of intersection are the forms and forces that shape and influence this body of work. The architectonic structure felt in many of the canvas’ are influenced by freeway signs - and most often the backs of the signs which reflect the light around them and reveal the supports which hold them in space.
One painting on exhibition, Through, is a multi paneled painting that stretches fourteen feet horizontally. That span encompasses contrast in both time and space, with some panels having been painted years apart from one another. As a result, the paintings are a suspension of parts that can stand as independent , yet are profoundly changed when seen in context of each other. These canvas’ suggest elements of landscape, figuration and abstraction. Arranged serially,they are all hung together in the framework of a multilane freeway sign. The concordance of this new whole suspending a kind of tone poem of light and surface, with each panel in a state of mutable interdependence.
This collage like manner of working allows for contrast and harmonies that are unpredictable, like the composition of one painting flowing into another painted several years later. The configuration express a new whole that is, at least in its conception, multidimensional. Seen all at once, this culling together of past and present gives that whole a particular “sense”. A reality that is mirrored in its making. Like the city, it is a collage of elements, some old, and some new, that physically embody in a complex collision of chance and intent, abstract and real, a palpable expression of intersection.

In addition to the Kamikaze show @ PØST, Danny Shain was invited to participate in an exhibition at the 2009 Venice Biennale.