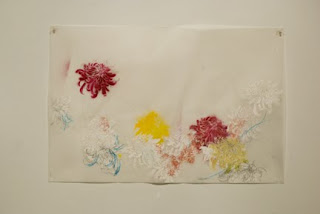 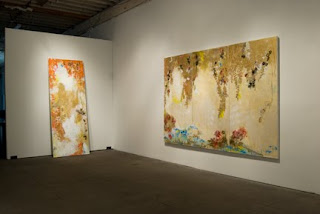 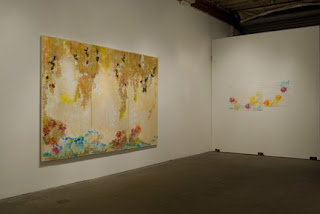 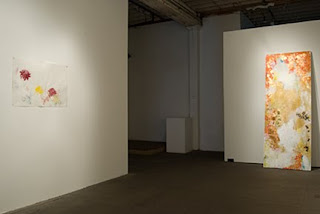 This one-day exhibition features recent paintings inspired by Japanese kimono fabrics and Fuji flowers (Japanese wisteria). Fuji flowers were popular in the Heian Period, the golden era of Japanese court culture.
In the show, Amano is presenting three large scale studies on canvas.
This is her first exhibition at PØST.

Quote from the exhibition catalogue for her most recent show in Spain:

“They have also become more kinetic-seeming, less and less the record of her hand in motion and more and more the image of something moving independently of her gestures. The overall inference is of flowers and trees dancing, not just in the wind, but of their own volition. That, of course, is precisely what plants don’t naturally do. But in Amano’s universe, that is how music and sound manifests, transforming the immobile animate into the animated animate. Fumiko Amano’s art has become about everything at once, and everything is alive.” –Peter Frank
Amano is one of the 2010 C.O.L.A. Fellowship artists. Her most recent show was at Murnau Art Gallery in Seville, Spain.