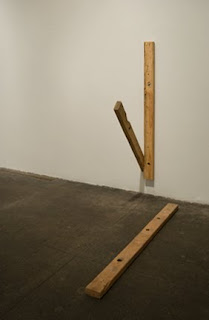 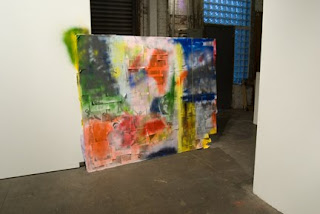 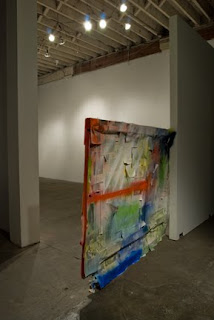 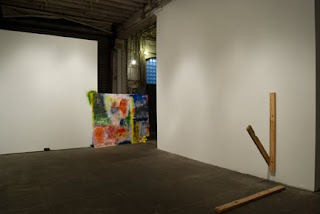 The title of this show is “Stillness." It is a very spare show, which creates visual stillness—a lot of empty white space. There are several small elements that move very slightly in the air, which create a sense of stillness relative to their movement. Stillness is only observable relative to its opposite.

The word also invokes its opposite, demonstrated by the visual clutter and movement of the Raquel Welch piece leaning precariously against a wall. The implied movement of the collapse of the piece creates an imagination of movement, as well as tension. Stillness may coincide with tension, as in the still before the storm, or it may suggest a peaceful tranquility. Stillness also has a sense of purity or achievement—as of a master who has figured things out and can be still and peaceful, not move around so much. There is a sense of fulfillment to the word—when you are satisfied with what you have done, and you can stop working. Stillness is a rare phenomenon because life is for the most part change and chaos. Though too much stillness can be depressing and stultifying.

A cluttered and chaotic piece is placed in the edge of a mostly empty space. There is an area of movement within the stillness. This makes the movement/clutter area something to examine and observe from all angles and distances. The space is unbalanced in an interesting way.
www.aliceclements.blogspot.com